How to develop systems that fit the bill? How to implement your programming language by assembling components off-the-shelf 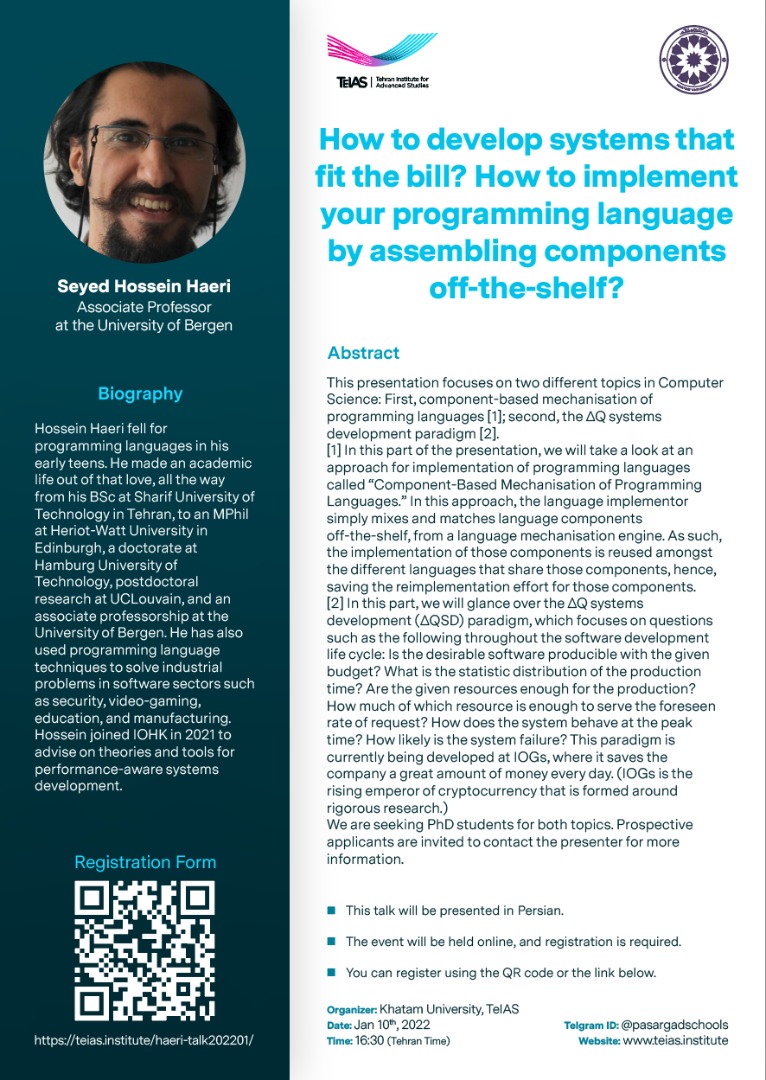 Associate Professor at the University of Bergen

This presentation focuses on two different topics in Computer Science: First, component-based mechanisation of programming languages [1]; second, the ΔQ systems development paradigm [2]. [1] In this part of the presentation, we will take a look at an approach for implementation of programming languages called “Component-Based Mechanisation of Programming Languages.” In this approach, the language implementor simply mixes and matches language components off-the-shelf, from a language mechanisation engine. As such, the implementation of those components is reused amongst the different languages that share those components, hence, saving the reimplementation effort for those components. [2] In this part, we will glance over the ΔQ systems development (ΔQSD) paradigm, which focuses on questions such as the following throughout the software development life cycle: Is the desirable software producible with the given budget? What is the statistic distribution of the production time? Are the given resources enough for the production? How much of which resource is enough to serve the foreseen rate of request? How does the system behave at the peak time? How likely is the system failure? This paradigm is currently being developed at IOGs, where it saves the company a great amount of money every day. (IOGs is the rising emperor of cryptocurrency that is formed around rigorous research.) We are seeking PhD students for both topics. Prospective applicants are invited to contact the presenter for more information.

Hossein Haeri fell for programming languages in his early teens. He made an academic life out of that love, all the way from his BSc at Sharif University of Technology in Tehran, to an MPhil at Heriot-Watt University in Edinburgh, a doctorate at Hamburg University of Technology, postdoctoral research at UCLouvain, and an associate professorship at the University of Bergen. He has also used programming language techniques to solve industrial problems in software sectors such as security, video-gaming, education, and manufacturing. Hossein joined IOHK in 2021 to advise on theories and tools for performance-aware systems development.
Add to Google Calendar